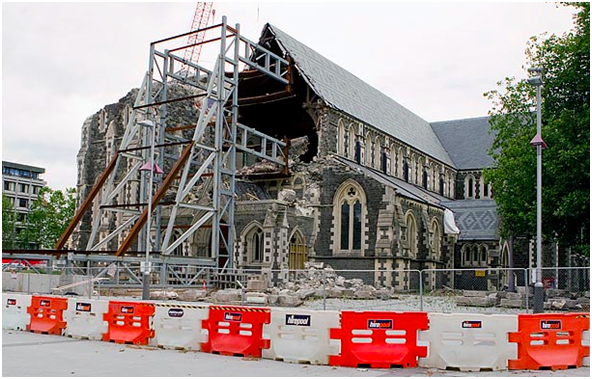 I think we live in the best place in the world.  The climate, mountains, lakes and beaches mean that nature has served us well.  The natural beauty of New Zealand is up there with the best on earth.  We are a friendly, proud and aspirational people, and that’s good too.  We are sports crazy, and we punch well above our weight on the international stage.  Our love for the underdog and support for those less privileged, are things that set us apart.  I’m a big fan of our government too, although I think our local bodies let us down terribly.

However, despite all the good stuff, we have had a major and dramatic failing over the last five years.  I refer to our collective response to Christchurch.

This week, Christchurch is back in the news for a number of reasons.  One of those reasons is in regards to CERA, the Canterbury Earthquake Recovery Authority, the government-established body set up to oversee the recovery of our so called Garden City.  After five years, CERA disbands this week as planned, and its work will be taken over by a combination of new and existing government and local government authorities.

Having spent plenty of time in Christchurch during the last five years, and having a broad understanding the property industry, I believe in the importance of a vibrant CBD to the well being of a city and it’s people.  I also believe that we need more debate about our response to Christchurch.

Five plus years on, the state of Christchurch’s CBD is a disgrace.  Our disgrace.  I was there a couple of weeks ago, and this is what I saw.

The Millennium Hotel sits abandoned in the Square, across the road from the Cathedral, it’s ground floor doors and windows boarded up.  Next door the old BNZ sits unaltered from almost three years ago when it was half demolished.  The remaining four floors (out of the original eight) sit still, amongst visible piles of exposed concrete and rubble.  I’m guessing that they are still waiting for the argument between owners, insurers, demolition crews and various red tape merchants, to be resolved before they can continue the work that stopped one thousand days ago.

Past the untouched ruins of the Cathedral who’s future is still being disputed, on the other side of the Square, Rydges Hotel sits boarded up, similar to The Millennium.  The Convention Centre site waits for activity.  The Avon River appears to be just getting started with its $90 million upgrade.  I’m not sure why it has taken so long.  A couple of glossy new buildings have popped up.  Private development efforts.  They look great.  But it’s too little. Too late.

The old retail district is still anchored by Ballantynes and is still there.  Just.  It is a sea of derelict and abandoned buildings.  The repurposed shipping containers are filling a gap that the retail precinct once provided.  It was a creative temporary solution to get people back to the city.  Some of the retailers are finding the going pretty tough.  Temporary solutions don’t last for long periods of time.

I could go on.  High Street has been closed for five years and rubble is still littering the road.  The once bustling “motor alley” between Tuam Street and St. Asaph Street is now a wasteland.  According to the Central Christchurch Recovery Plan, the area was going to be a cycle trail and walking path.  But nothing’s happened.

I could go on, but you probably get the idea.

Christchurch, and the recovery of the CBD in particular, is a missed opportunity.  There has been plenty of vision.  The afore-mentioned recovery plan was full of it.  Anchor projects such as new Bus Terminal, Justice precinct, Stadium, and Metro Sports Facility.  To be fair some of these are now either complete (bus terminal) or underway (Justice).  But others are languishing on the drawing board.  I remember clearly the disappointment among the people when the completion date for Metro Sports was put back to 2017.  As it turns out, it probably won’t have started by then.

You see, with vision must come leadership and execution.  And on that front we have failed.  The establishment of CERA was ambitious and innovative.  They attracted some outstanding and well-qualified people who have worked extremely hard in very difficult circumstances.  Some people put successful careers on hold to join the effort.  Others came back from overseas to help.

But in the end, in my personal opinion, CERA failed.  I spent some time in Christchurch working closely with CERA in 2013, two and a half years after the big quake.  During that time I spent a lot of time with a number of the key property developers and some of the major CBD tenants.  The developers of course, have had a field day, and have been largely responsible for the progress you do see.  Victoria Street on the city fringe, is a shining example of how new buildings and relocated tenants can revitalise an area.

One of those developers told me the following in 2013.  “The only progress in this city is happening in all the places where CERA aren’t.”  I thought it was slightly harsh at the time.  There has been some progress.  However, with the benefit of another two and a half years of hindsight, he is largely correct.  Even now, much of the progress we are starting to see in the CBD is coming from the efforts of those private developers.  People like Tim Glasson, Stephen Collins, and the ever-colourful Anthony Gough.

As someone once said to me back in 2013, unfortunately CERA became a government department.  Yes it attracted some outstanding people from the design, property and economic arenas.  But those people became surrounded by government bureaucrats; many from the Ministry of Social Development or Education.  These were not bad people either.  However, very few of those people had property backgrounds or other relevant knowledge.  What they did understand was how to operate in a government bureaucracy.  And that is what we have had.

Government bureaucracies are not the type of organisations you would choose to get big projects completed on time or on budget.  (Incidentally, I shudder to think of what has happened to building costs in the five years we have been dithering.)  They are slow.  They are constantly seeking more and more information to support an idea, a process that is highly effective at covering backsides but dramatically slows decision-making.  At CERA there was far too much effort in reporting to the Minister, and not enough effort in rebuilding the city.

So now, five years on, we need to understand where we go from here.

As we know the city of Christchurch is still rumbling occasionally.  But that’s nature.  We can’t do anything about that.  What we can do something about is how we respond.  To date, our response has failed.  What was once a blank canvas on which to build the world’s leading new city is now a recovery operation.

And so, as CERA’s deckchairs are reshuffled into a group of ‘similar but different’ entities contemplated by the Greater Christchurch Regeneration Bill, I would ask the Government to rethink the basis on which the city’s redevelopment is led.  In particular, I make the following suggestions.  Incidentally, I’m not saying this is easy.  But we have to give ourselves the best chance of succeeding.

First up, establish a City Transition Authority that has the authority to run the entire rebuild and recovery as it see’s fit, albeit within clearly defined guidelines around the future shape of the city.

Secondly, we need to appoint a Board of Directors and a leadership structure for that Authority comprising the best business minds in the Country.  People who are trusted by both the Government and the City Council to do the best possible job in the interests of the people of Christchurch and New Zealand.  Think people like banker and former Air NZ CEO Sir Ralph Norris, Sky City Chairman Chris Moller, Politician Sir Michael Cullen, Air NZ Chairman and Cantabrian Tony Carter, and Kiwi Income Property Trust founder Richard Didsbury.  There will be others.  Property people.  Business people.  Creative people.  People who can bang heads together and get things done.  Pay them well too.  They are worth it.

Thirdly, agree an aspiration or a goal that gives everyone a target.  Christchurch is a sports mad city.  Perhaps the city should bid for the 2026 Commonwealth Games.  It will be 52 years after 1974 after all.  Something that we can use to galvanise the people and focus the effort.  People will respond to goals and timeframes if they see them as achievable and they believe progress is being made.  Measureable progress against an aspirational target, will further motivate the broader population to do their bit.  It’s no different to any business.  People need to understand what they are working for and see progress made against that in order to understand the importance of their contribution.  For all of those involved, the city needs to mean something again.

Finally, once we have the right structure, the right people and an aspiration that everyone understands, stand back and let the people get on with it.  The Government has done that successfully elsewhere in developments such as Hobsonville in Auckland’s west.  Reporting regularly to the responsible Minister and the City Mayor should be sufficient.  As long as they don’t get in the way of progress.

In John Key, we have an outstanding leader, the nature of whom many in other countries (like Australia and the USA) appear to be searching for.  His understudy and Finance Minister, Bill English, is probably the most understated and over performing executive in the country right now.  Lianne Dalzeil, the Mayor of Chirstchurch is a smart and politically astute woman.  These people, our leaders, have the capability to change the way we are going about rebuilding one of our most important cities.  Their challenge is to grasp the opportunity and make the next five years really count for the future of Christchurch.

With a bit of luck, I’ll see you at the 2026 Commonwealth Games.