Migrants welcome – we need you

This week we heard some details of the future of our immigration policy, as seen by the current Government.

Like a lot of what’s coming out of Wellington at the moment, it masquerades as long term idealist thinking that pays no attention to short to medium term reality.

Long term thinking is great, if the ultimate idea is right. But you have to be realistic about how you get there.

The goal of attracting tourists who bring more value to our shores makes sense. I have often said we need to lift our sights in terms of the tourists we attract. If those people can invest money here and pay tax here, even better.

But 200 wealthy tourists aren’t going to keep the country going.

We have to be realistic about the tourists we have traditionally attracted, and what they offer.

Historically, many of our working tourists have made an important contribution. It now appears that we are talking about discarding these people. In my view, while we’re trying to get back on our post-Covid feet, we need all the help we can get.

I heard Jim Boult, Queenstown’s mayor, speaking at a function recently. As readers of this column will know, I don’t always agree with Mr Boult, despite the fact that I think he’s a good fella. In his speech at the opening of a new law firm in his city, he made a lot of sense. In doing so he mentioned a quick statistic.

He said that before the pandemic hit our shores, New Zealand had over 300,000 migrant workers. He went on to say we now have 130,000. That struck a chord!

While our tourist numbers are down, we may well be able to cope with fewer working migrants in the short term, particularly in the tourism and accommodation sector. 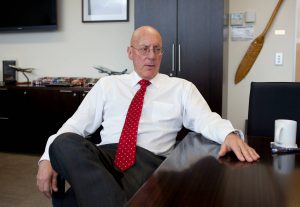 However, with apples rotting on the ground, the inability to find a truck driver for hire, and the challenges the re-emerging hospitality sector is having finding staff would all suggest that the current levels are not enough, even for the present run-down state of our economy.

“Run down?” I hear you ask. “But we’re all busy and things are going well”.

We might be busy, but the reality is that in all likelihood, when the March quarter GDP results come out, we will have had two consecutive quarters of negative growth again, and technically, we will be in recession (again).

We’re also carrying more debt than ever before. And I’ll go further to suggest that, if it weren’t for the positive vibes we’re all feeling because of the value of our houses, we all might be a bit more circumspect about how well we’re going.

So let’s accept the warning!

The reality is that, if we need more productivity, we need more workers. People who are prepared to work. People to do the jobs that others, and many of our own, won’t do. So guess what? We need migrant workers. Because we need their talent and their numbers. Numbers of willing workers that we don’t have.

The Government line is that the availability of migrant workers is suppressing the pay and conditions of New Zealanders who could otherwise fill the jobs. But the reality is that there aren’t any locals who either want to, or are capable of, filling the jobs.

By the way, let’s make something really clear. Hiring migrant workers is not cheap. Kiwi employers who go down the path of hiring these people do so because they need to — for the very survival of their businesses.

It can cost up to $10,000 in immigration support to get them here. Often they need help with housing. It can take a bit of time to get them up to speed with the country and our ways of doing things. This is not a cheap exercise for business.

But they’re fast learners. They work hard. They look after the gear. And they’re a pleasure to have in the business.

Sure we have some unemployed people. But at 4.7 per cent unemployment, the rate is not particularly high. And in my experience, plenty of those unemployed people don’t want to be employed. In fact, the value difference between the willingness and availability of the local, and the potential migrant, couldn’t be further apart.

A mate of mine runs a building products company. All up he employs more than 300 people. He needs warehouse workers and truck drivers.

He uses every government and private service available to find people. The so-called unemployed only turn up for an interview when they are told they have to in order to retain their benefits. Of course, once they get to the interview many of them behave in a manner that ensures they won’t get the job.

Last week my mate secured a young man to work in the warehouse. He turned up last Monday, on time and well presented. Just as he had been for the interview. By all accounts, he did a good day’s work.

However, as the sun came up on day two, he didn’t show up. As you would expect, the warehouse manager called to check in. In particular he wanted to make sure that the new hire was OK. It turned out that he was OK. But after one day’s work, he’d decided not to come back. He said it was too hard. Said he could stay on the couch at home and get almost the same amount of money.

I remember working in a warehouse. It was hard alright. We unloaded trucks by hand. No pallet hoists. No forklifts. Twenty five kilo cartons of cooking oil, one at a time, off the truck and into the grocery warehouse.

We did it because we had aspiration. We didn’t want to work in a warehouse forever. In my case it was to pay for an education. The other guy on the back of the truck had a young family that needed feeding and housing.

That was the mindset. You do this stuff so you can go somewhere better. We need that mindset back.

Too hard! You see it’s easy to sit on the couch and accept the government cheque. But doing so doesn’t take you anywhere. In a year’s time, you will still be on on the couch.

But if you have some aspiration for yourself or your family, you’re better to go to work. At first it might seem financially marginal. But if you turn up on time, do a good job, and respect the opportunity you have, you can move upwards. And in an environment where there’s a shortage of good people, you can grow.

You might feel like you’re starting at the bottom, but you can work your way up. Do a good job in the warehouse and you can get your forklift licence. The boss will probably even pay for you to do it. Before you know it, you’re driving a forklift and earning a few more dollars per hour.

Then you get your truck licence. We’re short of truck drivers in this country. So there’s plenty of work. That’s security. So you drive a truck. A few more hours each week and a few more dollars for each hour. It compounds. Just like investing.

Who knows, there might even be a slot as a warehouse manager that comes up. If you can drive a truck and a forklift, and you’ve spent a few short years building a reputation for being reliable and doing a good job, you could be in line for that.

And before you know it, that guy sitting on the couch, still getting the government cheque, who was once your equal, has been left far behind.

Somebody once said that hard work can put you in a place where good luck finds you. I believe that.

Spelt out like this, it sounds like an easy solution. But we’ve created this problem over generations. And it will take at least a generation to overcome.

If one person, currently sitting on a couch, reads this article and goes to work on Monday, we’re making progress. Take a mate and we’re doing double.

But in the meantime, we need anyone from around the world who is willing to help us fill the void. Contrary to uninformed thinking, they won’t come cheap. But they will come willing and able.

You see, we can say what we like about migrant workers, but in many cases they’re doing jobs that no one here will or can do.

And if Mayor Jim Boult is right, we need at least 170,000 of them. And the current government allocation of 500 per month isn’t going to cut it.

This article first appeared in the New Zealand Herald on Saturday 22 May 2021.